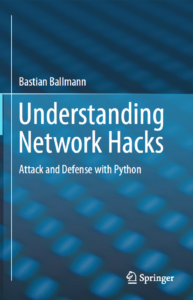 Scapy, as already told, is a python library, that allows surgical task with packets, both creating and sniffing.

Also all the scapy features, can be used in any python script/program as you prefer to call them, based on the size and complexity.

There are two points to be noted:

Scapy documentation is quite small, and not much based on scenarios, is more a doc on the library as is.

So you have a wonderful knife but little on how to contextualize the usage.

In another way it documents scapy, nothing about python, so you would have to learn , if the case, python on a general purpose book, and then come back to the specific references about scapy.

It in not efficient.

Someone, Bastian Ballman, made a great job to contextualize both python and real scenarios, with the sole goal of make evident the scapy way, swimming in python and real security issues. So all in one, in a synergistic way, all in 186 pages.

This wonderful book shows the basic of python and the use of scapy in real scenarios, as already told, in only 186 pages, with all and only all is needed to start fighting just after closing the back cover.

Code can be also downloaded, but is highly suggested to write all the stuff, and compare if the case with the downloaded one.