The reason for using Ubuntu is the availability of some great tool, difficult to get working on Windows systems, so as we are building an All In One VM, we  will stick to the latest 16.04 LTS, already supplying the insight GDB front end, previously built, and, as just released on April 21st , will cover the next 5  years.

Also if building is funny, the goal is having a working set to fulfill customer needs for as long as possible, so get relaxed up to 2021, and use the result.

Our VM will supply the following tools: 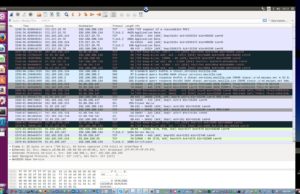 Installing Wireshark from the Ubuntu repository

Wireshark is included in the default Ubuntu repository, also it could not be the latest version.

Ubuntu 16.04 LTS was released 3 days ago, so it contains a current version. So currently it can be setup using the following command:

If later the version available will become out of date there will be a chance to get a more recent one on the Launchpad repository, that can be added in this way:

To be able to capture using a non root user, there is a need to change execution permissions to dumpcap:

Get the latest version:

Now the funny part is finished. The time to use them has arrived.